skip to main | skip to sidebar

Esquire's "75 Most Influential People of the 21st Century"

Cited as one of the "75 Most Influential People of the 21st Century", Power gets the nod for her contributions to the foreign policy debate and her work getting mass atrocities and the human face of foreign policy choices embedded into the public consciousness. Power takes her place on the list among innovators and intellectuals from Senator Obama to Bill and Melinda Gates.

Accompanying this feature in Esquire is the artistic interpretation of the work of the honorees by mixed-media artist Lincoln Schatz. Samantha's profile with John Prendergast (of the ENOUGH Project) can be found here.
Posted by Samantha Power at 7:33 PM

Power's review of Gary Bass's Freedom battle appears on Slate this week. Assessing double-edged sword of "humanitarian intervention", Power outlines the hypocrisy of states who commit human rights abuses, and then turn a critical eye to countries who have committed similar - or even lesser - sins, calling for intervention. She concludes that Bass's work is a comprehensive historical look at the positive and negative applications of humanitarian intervention, and muses on the path that must be forged between "blinding zeal and paralyzing perfectionism" for future applications of intervention.
Posted by Samantha Power at 7:00 PM

SP in The New York Times

Commemorating the 5th anniversary of the bombing of the Canal Hotel - known as the "UN's 9/11" - Power turns a critical eye on the current state of security for humanitarian and civilian aid workers. With the recent killings of IRC workers in Afghanistan, aid workers are continually finding themselves targets of violent militant groups that equate them with government and armed forces.

Posted by Samantha Power at 6:50 AM

In "A Question of Honor", the role of dignity in foreign affairs is mused, while taking a critical look at the reign of Vladimir Putin. Power charts the perceived diplomatic slights of Putin's term, the consequences of those perceptions, and the danger of using aggression to restore honor.
Posted by Samantha Power at 7:54 AM

In "Karadzic a Big Win for Hague Cops", Samantha's latest Time Magazine column, SP examines the importance of international courts of justice and discusses some important lessons skeptics can learn from Serbia, Chile and Liberia. Reflecting upon her own experience in Bosnia during the Balkan Crisis, Power ruminates on what the arrest of Karadzic means for the future of accountability for war crimes.
Posted by Samantha Power at 8:39 AM

The Democrats and National Security

In her upcoming piece for the New York Review of Books, Samantha evaluates the long-held view that the Republicans are the 'national security party.' In 'The Democrats and National Security,' SP explains how this view developed and how it has been diminished under George W. Bush. She also addresses the main themes that Barack Obama should focus on for highlighting the weaknesses of this view and how the Democrats can show they will prove more reliable in keeping America safe.

Read the full story here.
Posted by Samantha Power at 9:01 AM

We are in the midst of launching a nationwide campaign on the subject of foreign policy in the United States and we would like your feedback on what campaign name and structure would be the most effective in communicating our platform for change.

To have your input included in the development of the campaign, please complete the survey below by Wed., July 23rd.
Posted by Samantha Power at 7:02 AM

In her latest Time Magazine column, "Saving Zimbabwe," Samantha discusses the problems of forcible regime change what should be done, instead, about the crisis in Zimbabwe. Read it here.
Posted by Samantha Power at 7:33 AM

Samantha examines the principle of engaging in dialogue with our enemies and its history in "Talking with Evil," her latest Time Magazine column.
Posted by Samantha Power at 4:03 PM

Samantha was honored on June 6th at the University College Cork a honorary doctorate of laws was conferred on her. Get the full address here.
Posted by Samantha Power at 9:14 AM

On June 2, Tribune Media Services announced that SP's column in Time Magazine will receive international syndication.
Posted by Samantha Power at 9:04 AM

In "Rekindling Canada's internationalist spirit", Canada's National Post quotes SP at the Munks Debate in Toronto and offers support for the mission of the UN. It expresses hope that Canada will look to leaders like SP and will return to being a power in international peacekeeping and reconciliation and re-embrace its internationalist ideals.
Posted by Samantha Power at 8:46 AM

SP and "Chasing the Flame" in UK's "The Time"

UK's The Times' Literary Supplement offers a critique of Chasing the Flame, calling it "complex and "compelling." It also offers some words on the career of Sergio Vieira de Mello and discusses the the book's possible impact on future US foreign policy decisions.
Posted by Samantha Power at 8:24 AM

John Crown from Ireland's The Independent offers thoughts on the importance of Samantha's emigration from Ireland to the United States. He discusses its implications for her career, successes and difficulties.
Posted by Samantha Power at 12:08 PM 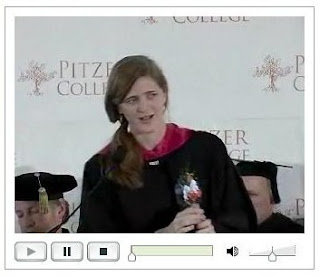 You can view the full video of Samantha's commencement speech here.
Posted by Samantha Power at 7:55 PM

In "Technology's Power to Narrow Our View", the latest Time Magazine column, Power raises the question of whether technology will make it more or less likely for young people today to commit to doing something for others.
Posted by Samantha Power at 8:21 AM

For the Time list of the "100 Most Influential People", SP writes about George Mitchell. From brokering peace in Northern Ireland to his quest to maintain the integrity of America's favorite pastime, Mitchell is the ultimate negotiator with a distinctly American story.

*Photo Courtesy of Erin Patrice O'Brien for Time
Posted by Samantha Power at 8:18 AM

In "Keeping Canada in Afghanistan", a column for Time Magazine Power argues that Canada’s military role in Afghanistan is one of the most revealing political and international-security debates since the end of the Cold War, a debate that is critical to the future of NATO and the U.S.’s struggle against terrorism.
Posted by Samantha Power at 7:31 AM

Samantha sat down with the UN's Refugee Agency, UNHCR, for a Q&A on Sergio's life and work, the motivation behind the writing of his life story, and of the future of the United Nations.

The full text can be accessed here.
Posted by Samantha Power at 10:27 AM

SP on the Colbert Report

Posted by Samantha Power at 5:24 AM

Posted by Samantha Power at 5:25 AM

More positive feedback on Chasing the Flame is available in this article from Slate.
Posted by Samantha Power at 10:23 AM

SP in Sunday Times of London

A profile of SP is featured in the February 24th edition of the Sunday Times of London. Discussed is her work with Presidential candidate Barack Obama, her latest book Chasing the Flame, and foreign policy.
Posted by Samantha Power at 9:36 AM

Posted by Samantha Power at 6:42 AM

Chasing the Flame Reviewed by "The Economist"

In "A brave man's journey", The Economist calls Chasing the Flame "a thoughtful account of the conflicts and disasters" that shaped Sergio's life and approach to peacekeeping. "In the blurry world between humanitarian aid and international law he was as good as it gets, wielding a mixture of ambiguity and decisiveness with the personal and institutional authority to make it all, sometimes, work."
Posted by Samantha Power at 11:20 AM

To sign up for e-mail updates, send an email with your name and email address to samanthajpower@gmail.com.

Samantha Power
Samantha Power is the Anna Lindh Professor of Practice of Global Leadership and Public Policy, based at the Carr Center for Human Rights Policy, where she was the founding executive director. She is the recent author of Chasing the Flame: Sergio Vieira de Mello and the Fight to Save the World (2008), a biography of the UN envoy killed by a suicide bomber in Iraq. Her book "A Problem from Hell": America and the Age of Genocide was awarded the 2003 Pulitzer Prize for general nonfiction, National Book Critics Circle Award, and the Council on Foreign Relations' Arthur Ross Prize. Her New Yorker article on the horrors in Darfur, Sudan, won the 2005 National Magazine Award for best reporting. In 2007, Power became a foreign policy columnist at Time magazine. From 1993-96 she covered the wars in the former Yugoslavia as a reporter for U.S. News and World Report, Boston Globe, and The New Republic. She remains a working journalist, contributing to the Atlantic Monthly, New Yorker and New York Review of Books. A graduate of Yale University and Harvard Law School, she moved to the United States from Ireland at the age of nine. She spent 2005-06 working in the office of Senator Barack Obama.